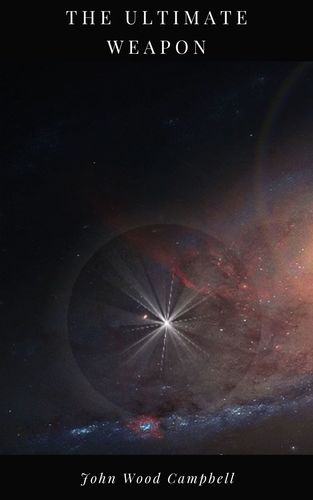 En savoir plus
Description
The star Mira was unpredictably variable. Sometimes it was blazing, brilliant and hot. Other times it was oddly dim, cool, shedding little warmth on its many planets. Gresth Gkae, leader of the Mirans, was seeking a better star, one to which his "people" could migrate. That star had to be steady, reliable, with a good planetary system. And in his astronomical searching, he found Sol. With hundreds of ships, each larger than whole Terrestrial spaceports, and traveling faster than the speed of light, the Mirans set out to move in to Solar regions and take over. And on Earth there was nothing which would be capable of beating off this incredible armada, until Buck Kendall stumbled upon THE ULTIMATE WEAPON.
Auteur(s)

John Wood Campbell Jr. was an American science fiction writer and editor. He was editor of Astounding Science Fiction (later called Analog Science Fiction and Fact) from late 1937 until his death and was part of the Golden Age of Science Fiction. Campbell wrote super-science space opera under his own name and stories under his primary pseudonym, Don A. Stuart. Campbell also used the pen names Karl Van Kampen and Arthur McCann. His novella Who Goes There? was adapted as the films The Thing from Another World (1951), The Thing (1982), and The Thing (2011).

Campbell began writing science fiction at age 18 while attending MIT. He published six short stories, one novel, and six letters in the science fiction magazine Amazing Stories from 1930 to 1931. This work established Campbell's reputation as a writer of space adventure. When in 1934 he began to write stories with a different tone, he wrote as Don A. Stuart. From 1930 until the later part of that decade, Campbell was prolific and successful under both names, though he stopped writing fiction shortly after he became editor of Astounding in 1937.

It is as editor of Astounding Science Fiction from late 1937 until his death for which Campbell is primarily remembered today. In 1939, Campbell started the fantasy magazine Unknown, which was canceled after only four years. Referring to his time spent as an editor, The Encyclopedia of Science Fiction states: "More than any other individual, he helped to shape modern sf."Isaac Asimov called Campbell "the most powerful force in science fiction ever" and said the "first ten years of his editorship he dominated the field completely."In his capacity as an editor, Campbell published some of the very earliest work, and helped shape the careers of virtually every important science-fiction author to debut between 1938 and 1946, including Asimov, Robert A. Heinlein, Theodore Sturgeon, and Arthur C. Clarke.

An increasingly strong interest in pseudoscience later alienated Campbell from Asimov. In the 1960s, Campbell's controversial essays supporting segregation, and other remarks and writings surrounding slavery and race, served to distance him from many in the science fiction community. Nevertheless, Campbell remained an important figure in science fiction publishing up until his death. Campbell and Astounding shared one of the inaugural Hugo Awards with H. L. Gold and Galaxy at the 1953 World Science Fiction Convention.