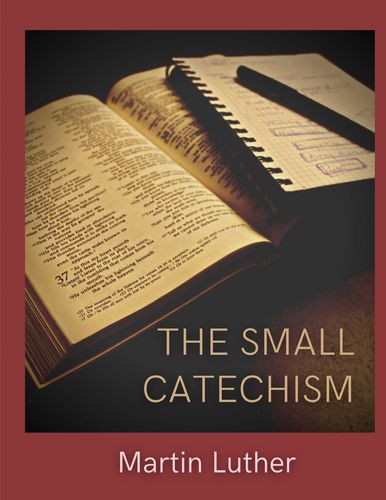 En savoir plus
Description
This annotated edition of "Martin Luther's Small Catechism" includes an extra appendix (in addition to the two already included in the original book) which provides an interesting overview of: Martin Luther's peasant roots, his education in pre-law, and how he was diverted from a law career to that of a monk-turned-professor and eventually, Protestant reformer,The role of the printing press in spreading the "95 Theses" quickly over Europe, catapulting Martin Luther to near-instant prominence in the religious dialogue of his day, The story of how Martin Luther colluded with a fishmonger to smuggle his future wife and her friends away from a convent, and Martin Luther's impact on the Protestant Reformation as well as modern religious thought.Martin Luther wrote the small catechism as an easy teaching tool for both individuals and families. Though penned close to five centuries ago, Luther's brief, clear summary of the essentials of Christian faith still ring true today.Topics covered include the Ten Commandments, the "Creed", the Lord's Prayer, and the sacraments of baptism and the altar. Ideas and instructions are also included for morning and evening devotions and giving thanks at mealtime. This little catechism, still widely used within the Lutheran Church, has gems of truth that many Christians will find to be both instructive and inspirational--regardless of denomination. Though few in words, it provides a wonderful explanation that has helped many to both learn the basics of Christian doctrine and apply them in a practical way to their lives.
Auteur(s)

Martin Luther (10 November 1483 - 18 February 1546) was a German monk, Catholic priest, professor of theology and seminal figure of a reform movement in 16th century Christianity, subsequently known as the Protestant Reformation. He strongly disputed the claim that freedom from God's punishment for sin could be purchased with money. He confronted indulgence salesman Johann Tetzel with his Ninety-Five Theses in 1517. His refusal to retract all of his writings at the demand of Pope Leo X in 1520 and the Holy Roman Emperor Charles V at the Diet of Worms in 1521 resulted in his excommunication by the Pope and condemnation as an outlaw by the Emperor.