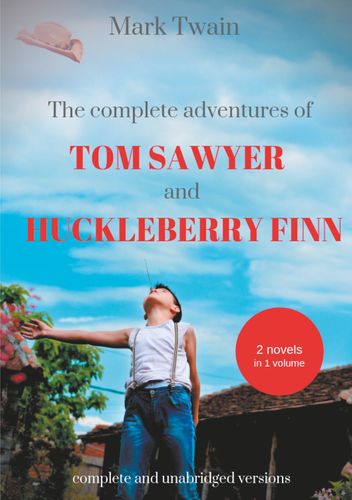 The Complete Adventures of Tom Sawyer and Huckleberry Finn

Two Novels in One Volume

En savoir plus
Description
Two Novels in One Volume Only !
This book contains two novels by Mark Twain :

The Adventures of Tom Sawyer is about a young boy growing up along the Mississippi River. Tom Sawyer accompanies Huckleberry Finn to the graveyard at night, where they witness a trio of body snatchers getting into a fight. When one of the men is killed, they overhear the murderer's plans to bury a box of treasure. What follows is a an adventure of a lifetime, as Tom and Huck search for the hidden treasure.
Huckleberry Finn runs away from the abuse of his alcoholic father. He immediately befriends a runaway slave named Jim, who is escaping the abuse of his owners. The two set out on a journey that involves theft, murder, and revenge. Along the way, Huckleberry Finn encounters Tom Sawyer, and the two hatch a plan to save Jim from a lifetime of slavery.

The Adventures of Tom Sawyer by Mark Twain is an 1876 novel about a young boy growing up along the Mississippi River. The story is set in the fictional town of St. Petersburg, inspired by Hannibal, Missouri, where Twain lived. Tom Sawyer lives with his Aunt Polly and his half-brother Sid. Tom dirties his clothes in a fight and is made to whitewash the fence the next day as punishment. He cleverly persuades his friends to trade him small treasures for the privilege of doing his work. He then trades the treasures for Sunday School tickets which one normally receives for memorizing verses, redeeming them for a Bible, much to the surprise and bewilderment of the superintendent who thought "it was simply preposterous that this boy had warehoused two thousand sheaves of Scriptural wisdom on his premises - a dozen would strain his capacity, without a doubt." Tom falls in love with Becky Thatcher, a new girl in town, and persuades her to get "engaged" by kissing him. But their romance collapses when she learns Tom has been "engaged" previously to Amy Lawrence. Shortly after Becky shuns him, he accompanies Huckleberry Finn to the graveyard at night, where they witness the murder of Dr. Robinson.
Auteur(s)

Mark Twain, born Samuel Langhorne Clemens, was an American humorist and writer, who is best known for his enduring novels The Adventures of Tom Sawyer and Adventures of Huckleberry Finn, which has been called the Great American Novel. Raised in Hannibal, Missouri, Twain held a variety of jobs including typesetter, riverboat pilot, and miner before achieving nationwide attention for his work as a journalist with The Celebrated Jumping Frog of Calaveras County. He earned critical and popular praise for his wit and enjoyed a successful career as a public speaker in addition to his writing. Twain s works were remarkable for his ability to capture colloquial speech, although his adherence to the vernacular of the time has resulted in the suppression of his works by schools in modern times. Twain s birth in 1835 coincided with a visit by Halley s Comet, and Twain predicted, accurately, that he would go out with it as well, dying the day following the comet s return in 1910.