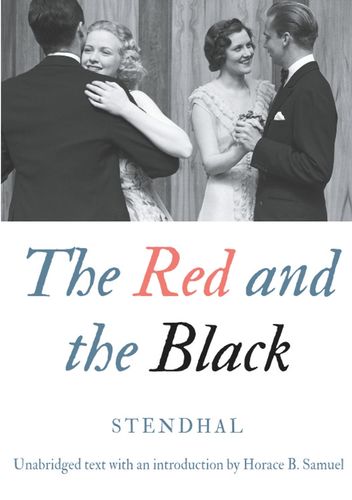 The Red and the Black

Unabridged text with an introduction by Horace B. Samuel

En savoir plus
Description
The Red and the Black is a historical psychological novel by Stendhal, published in French in 1830 as Le Rouge et le noir. The novel, set in France during the Second Restoration (1815-30), is a powerful character study of Julien Sorel, an ambitious young man who uses seduction as a tool for advancement.

M. de Rênal, the mayor of the provincial town Verrières, hires Julien Sorel to be his children's tutor. Julien is only a carpenter's son, but dreams of following in the footsteps of his hero, Napoleon. However, in Julien's time, men gain power in the Church and not in the army. Even though he is training to become a priest, Julien decides to seduce the mayor's wife, Mme. de Rênal, because he thinks that it is his duty. They become lovers, but M. Valenod, the mayor's political adversary, finds out about the affair and begins to spread rumors. M. de Rênal is profoundly embarrassed, but his wife convinces him that the rumors are false. M. Chélan, the town priest and Julien's mentor, sends him to the Besançon seminary to avoid any further scandal.

The director of the seminary, M. Pirard, likes Julien and encourages him to become a great priest. Julien does very well at the seminary, but only because he wants to make a fortune and succeed in French society. The other priests at the seminary are not aware of Julien's hypocrisy, but are jealous of his intelligence. M. Pirard is disgusted with the political involvement of the Church and resigns. His aristocratic benefactor, the Marquis de la Mole, wants M. Pirard to be his personal secretary in Paris, but M. Pirard tells him to hire Julien instead.

Julien is both enthralled and repulsed by Parisian society at the same time. He tries to fit in among the nobles but they treat him as a social inferior. However, the Marquis's daughter, Mathilde, falls in love with Julien and they become lovers. When Mathilde gets pregnant and tells the Marquis about her affair, he is furious, but soon ennobles Julien so Mathilde can marry him. Julien finally has the aristocratic title he always wanted. But Mme. de Rênal sends the Marquis a letter denouncing Julien as a womanizer only concerned with making his fortune. The Marquis then refuses to let Mathilde marry Julien, who furiously returns to Verrières and shoots Mme. de Rênal. She survives, but Julien is sentenced to death anyway. Mme. de Rênal forgives Julien and dies of love three days after his execution (Sparknotes)
Auteur(s)

Marie-Henri Beyle (23 January 1783 - 23 March 1842), better known by his pen name Stendhal was a 19th-century French writer. Best known for the novels Le Rouge et le Noir (The Red and the Black, 1830) and La Chartreuse de Parme (The Charterhouse of Parma, 1839), he is highly regarded for the acute analysis of his characters' psychology and considered one of the earliest and foremost practitioners of realism.