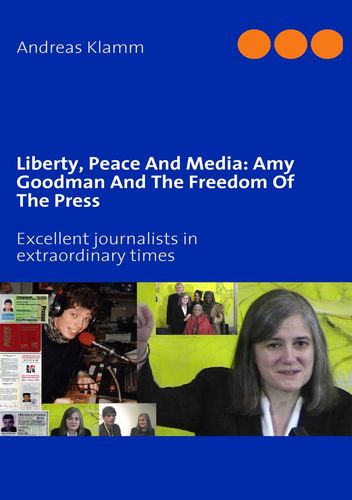 Liberty, Peace And Media: Amy Goodman And The Freedom Of The Press

En savoir plus
Description
Liberty, Peace and Media: Amy Goodman And The Freedom Of The Press - Excellent journalists in extraordinary times ...is a book about some important parts of the work of the journalist, broadcast journalist and author of several books Amy Goodman, which is also host of Democracy NOW! The television and radio program Democracy NOW ! is standing for truly independent journalism and education.

Amy Goodman a Harvard University graduate is the first journalist ever which has received in December 2008 in the city of Stockholm in SWEDEN the Right Livelihood Award as known also as the Alternative Nobel Prize. Amy Goodman can be also best described as an excellent journalist, peace activist and a true voice for peace.

Amy Goodman has said during an interview on MSNBC television in New York City, United States of America: “Negotiation is the only one answer. There is got to be an answer other then war.” Perhaps statements like these by Amy Goodman, which are also controversial discussed has caused to ask another colleague and journalist the question: “Is there anyone which can not love Amy Goodman?”

Since 1984 I am working as independent journalist, broadcast journalist and author of several books. Three books which I have written have been published in 2008. In 1986 I became the founder of the international media project association and media network IBS Independent Broadcasting Service Liberty, Radio IBS Liberty and IBS Television Liberty, which is supporting international understanding since 1986.

In December 2008 when Amy Goodman (United States of America), Dr. Monika Hauser, (Swiss-Italian, medica mondiale Germany), Krishnammal Jagannathan and her husband (India) and Asha Hagi (Somalia) have received the Right Livelihood Award as known as the Alternative Nobel Prize I had the chance and duty to travel to Stockholm in Sweden for special research and reports on radio, television and papers and I am very thankful that I had the chance to meet my colleagueand journalist Amy Goodman from Democracy NOW!

Amy Goodman is an excellent and amazing journalist, broadcast journalist and author which has written with her brother David Goodman three hard hitting books, such as “Standing Up To The Madness – Ordinary Heroes in Extraordinary Times”, “STATIC – Government Liars. Media Cheer Leaders And The People Who Fight Back”, and “The Exception To The Rulers, Exposing Oily Politicians, War Profiteers and the Media That Love Them”. More information on Democracy NOW! with Amy Goodman and Juan Gonzalez you will find on: www.democracynow.org

Amy Goodman has said: “We need a media in this country that is open to the voice of the peace. Negotiation is the only one answer. There is got to be an answer other then war.” I am able to agree with my colleague Amy Goodman and her statement is making sense to me and my hope is it will make sense to other people in this world also. Andreas Klamm, journalist, broadcast journalist and author. London, United Kingdom. January / February 2009.

Liberty, Peace And Media: Amy Goodman And The Freedom Of The Press
Excellent journalists in extraordinary times
276 pages
ISBN 978-2-8106-0269-8
Auteur(s)

Andreas Klamm, born on February 6, 1986 in Germany, city of Ludwigshafen am Rhein is a FRENCH- German journalist, broadcast journalist and author since 1984. His grandfather, the former FRENCH ARMY OFFICER and FRENCH CITIZEN, Mr. Haedi Sabaot is MISSING since the end of World War II in 1945. He was stationed in Kaiserslautern, Germany. The author is involved in an international research for his grandfather since 1986. Although he likes the people of the United States of America very much and has been two times traveling to New York City in 2001 / 2002 he is thinking in many ways cosmopolitan and supports the movement for WORLD CITIZEN.

The author of the book Liberty and Peace NOW! Human Rights Reporters Andreas Klamm is working since 1984 as a journalist, broadcast journalist and author of several books. In 2008 he has published three other books. He is also the founder and director of several international alternative independent media networks such as IBS Independent Broadcasting Service Liberty, Radio IBS Liberty and IBS Television Liberty and of Grace Med Care Ltd., London, United Kingdom. In the age of 16 in 1984 he became also a broadcasting host of several television and radio programs and an independent television, radio, film and media producer. In 1986 he has founded IBS Independent Broadcasting Liberty (Leeds), Radio IBS Liberty, IBS Television Liberty (www.ibstelevision.com, www.ibsliberty.wordpress.com). The international alternative and independent media network is supporting international understanding and grassroot movements for democracy since 1986. In 1986, 1987, 1988, 1989 he has received for some of his television productions awards and promotions by a department of the state for political education.