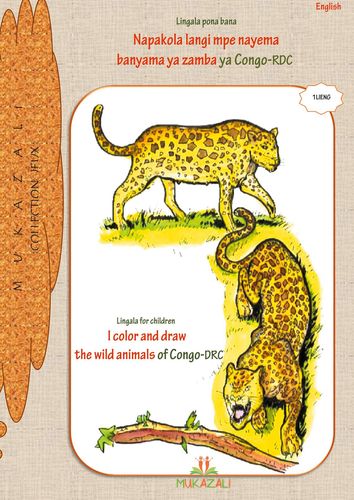 En savoir plus
Description
This coloring and drawing book is based on the animals from the book « The wild animals of Congo-DRC ».
Auteur(s)

MUKAZALI was born in Kinshasa in the Democratic Republic of Congo.

Passionate about Congolese languages, she wanted to associate them with other languages (french and english) in order to facilitate cultural exchange by language : an effective means of communication and also continue to bring them to life through books and workshops on Congolese culture.

About ten years ago, she thought good to compile words by theme so that children, from their early age, familiarize themselves with these languages which are also part of their cultural heritage.

For this collection (by different themes) of children's books with color illustrations, she writes and translates from French, English or German to four national languages spoken in Congo-DRC : Lingala, Kikongo, Tshiluba, Swahili ... And also in Lari (language spoken in Congo-Brazzaville).

Several themes are planned : school and class, animals from Congo, home, food and kitchen, family, DRC, games ...
And also manuals for learning to read and to write Congolese languages.

The illustrations are handmade.

The paper used is chlorine free, acid free and wood free ... resistant to aging and FSL certified (organization that manages the forest).

His books are available for download (for those which can be) on Itunes, Spotify, Apple music, GooglePlay, TikTok, Amazon and YouTube.

She has already created an application called MUKAZALI for smartphones and tablets, which is for download on GooglePlay since March 2014.

This application is a dictionary in French-Lingala, Lingala-French (+ 2600 words in French) and (+ 2000 words in Lingala).
Translation with SYNONYMS, CONJUGATION, GRAMMAR, NUMBERS, ARGOT and PROVERBS in Lingala.
Updates are planned for this application.


The workshops are based on general Congolese culture, its geography, its history, its traditions, the family, the way of life ...