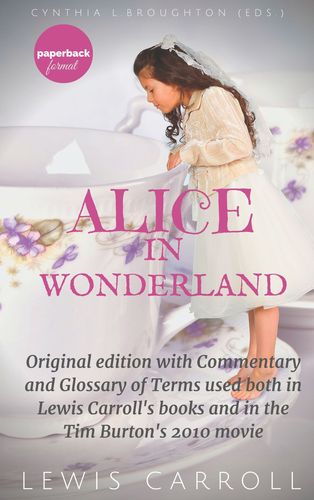 En savoir plus
Description
Lewis Carroll's classics around the World is proud to present with this edition the first multilingual edition of the 1865 Lewis Carroll's masterpiece for the first time available in four langages (English - French - German - Italian).

This edition includes the unabridged versions of :


Alice's Adventures in Wonderland (commonly shortened to Alice in Wonderland) is an 1865 novel written by English mathematician Charles Lutwidge Dodgson under the pseudonym Lewis Carroll. It tells of a girl named Alice falling through a rabbit hole into a fantasy world populated by peculiar, anthropomorphic creatures. The tale plays with logic, giving the story lasting popularity with adults as well as with children. It is considered to be one of the best examples of the literary nonsense genre.Its narrative course and structure, characters and imagery have been enormously influential in both popular culture and literature, especially in the fantasy genre. Dodgson's tale was published in 1865 as Alice's Adventures in Wonderland by "Lewis Carroll" with illustrations by John Tenniel. The first print run of 2,000 was held back because Tenniel objected to the print quality.A new edition was quickly printed, released in December of the same year but carrying an 1866 date. The text blocks of the original edition were removed from the binding and sold with Dodgson's permission to the New York publishing house of D. Appleton & Company. The binding for the Appleton Alice was virtually identical to the 1866 Macmillan Alice, except for the publisher's name at the foot of the spine. The title page of the Appleton Alice was an insert cancelling the original Macmillan title page of 1865, and bearing the New York publisher's imprint and the date 1866. The entire print run sold out quickly. Alice was a publishing sensation, beloved by children and adults alike. Among its first avid readers were Queen Victoria and the young Oscar Wilde.The book has never been out of print. Alice's Adventures in Wonderland has been translated into at least 174 languages.
Auteur(s)

Charles Lutwidge Dodgson (1832 -1898), better known by his pen name Lewis Carroll, was an English writer, mathematician, logician, Anglican deacon, and photographer. His most famous writings are Alice's Adventures in Wonderland, its sequel Through the Looking-Glass, which includes the poem "Jabberwocky", and the poem The Hunting of the Snark, all examples of the genre of literary nonsense. He is noted for his facility at word play, logic and fantasy. There are societies in many parts of the world dedicated to the enjoyment and promotion of his works and the investigation of his life.